In this issue of Bethel magazine, we reflect on the service of Bethel’s seventh president, Gregg A. Chenoweth, Ph.D., and first lady, Tammy (2013-2021). Here is a look at some of the many ways they were impacted by and left their mark on the Bethel community.

The Chenoweths are communicators and relators who ate lunch with students and opened their home for events. The president led a student ministry group to Nepal, and he and Tammy co-led the largest international travel group in Bethel’s history in honor of the University’s 70th anniversary – a Holy Land Tour, with Associate Professor David McCabe, Ph.D. They supported Bethel financially, and with significant prayer, led by Tammy and a faithful team that met each Wednesday at noon, every year for eight years. Tammy also provided bursts of short-term staff support in Financial Aid, Admission, and projects from the President’s Office.

It has been a time of creative and rapid program launches. In fact, Director of Career Services Tyler Grant said of the president, “I always perceived him as showing up with a new idea every day. That was encouraging. It signaled to me that he was awake at 2 a.m., believing in us.”

During these eight years, new program options were created for students: two debt-free degree options; 19 online academic degree tracks; and 10 degrees on campus, among them financial services, engineering management, worship arts, and two through the new Center for Computing. Seven intercollegiate sports teams were launched, as well as programs to support growing diversity (from 19%-31% students of color), increased mental health services and more.

It has also been an era of partnerships. Seven of Bethel’s athletic teams have utilized new facilities across our city; a Kindergarten Lab Classroom opened on campus, in coordination with School City of Mishawaka; and three degrees are now offered in conjunction with other universities. And through Bethel University Extension Studies (BU-X), new instructional sites were established across 15 cities, from Hawaii to Ohio.

Financially, Bethel has enjoyed the longest series of consecutive years with ratios the U.S. Department of Education deems “financially responsible,” in recent years. They did this primarily by paying down long-term debt, investing in campus assets, operating more efficiently, protecting cash reserves and removing the need for lines of credit. Nearly $28 million was raised for student scholarships, academic and co-curricular programs, campus renovations, and four major construction projects that supported campus-wide needs. More than 3,000 new donors joined Bethel’s cause.

Bethel’s work culture saw dramatic appeal. In fact, it was one of only six universities in America profiled in a doctoral dissertation for achieving higher than average employee engagement at work. This was driven by stronger than normal scores in innovation, commitment to excellence, supervision, and recognizing employee work. And recently, in a third-party survey, nine of 10 students and employees reported satisfaction with their choice to work or study at Bethel. Top Bethel traits named by constituents included: Christ-centered, mentoring, strong academics and community.

Quality markers also came to Bethel during this time, such as: re-accreditation of all programs and of university-wide operations; being ranked first in the nation for “Top Christian Colleges and Universities Exceeding Expectations” (2015); U.S. News & World Report (“Best College in the Midwest” for 17 consecutive years); Washington Monthly (“Best Bang for the Buck” list). Bethel’s sports teams also won three national championships in the last eight years.

Spiritual life flourished to nearly seven in 10 undergraduate students voluntarily engaged in mentoring/discipleship pairs or groups. Bethel established its first Missionary Church Endowed Professor of Biblical Theology and hosted large events or annual series for the region, such as ReFuel for worship leaders, a ReDiscover Series for pastors and Breaking Free for spiritually encumbered students. Post-graduation young alumni surveys, for those five years into the workforce, show very high faith integration and critical thinking skills for career and life.

During Chenoweth’s tenure, Bethel also ushered in a new era by changing its name from college to university, a decision prompted by the Board of Trustees and affirmed very broadly by constituents. This change also modernized signage and logos.

Bethel University Board Chairman and alumnus Randy Lehman ’85, says, “President Chenoweth and Tammy faithfully served Bethel, and the university made remarkable strides during his tenure.”

Chenoweth says, “God is doing things through us. It is for His glory, not a president nor anyone else. I am so grateful for colleagues who work as unto the Lord, not me. Bethel is a special place. I will continue to applaud her from afar.” 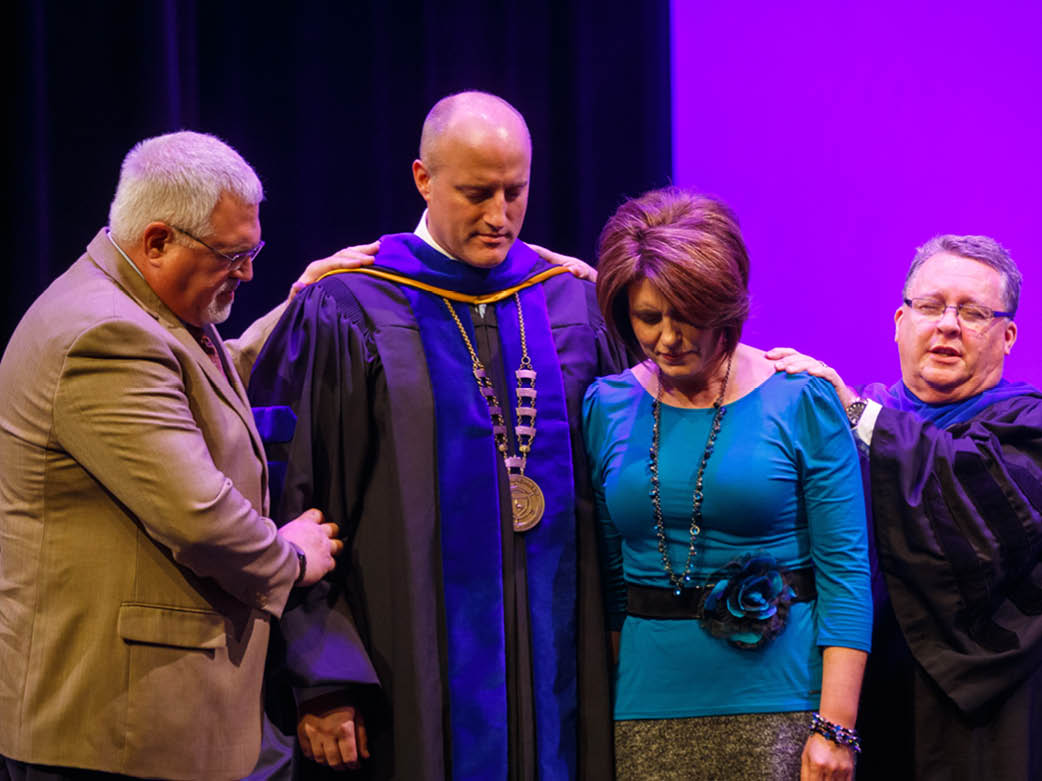 Prayer during Chenoweth's Inauguration in 2013